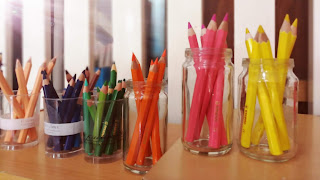 “Cring......” The sound of breaking glasses ringing in the air of the Clover Montessori classroom. The teachers were in their quickest to dismiss the children near the scene of the broken jar, and took up their cleaning roles swiftly to ensure the broken pieces were all cleared away. “I didn’t do it on purpose...” Covie, who was 4 years old, said with a tiny voice, standing by the side of the scene. “It’s okay.” said her classmate Yohan, who was barely 4 years old.   The teachers maintained their composure, and they did what they always did when any child broke something in the class accidentally. There was no blaming, there was no questioning like “why did you do that?”, there was only show of concern to check if the child was hurt by any broken pieces. “I didn’t do it on purpose.” Covie continued saying in a tiny voice. “It’s okay, it’s okay.” said a few classmates who stood close to her, and their tone was comforting and relaxing. Their tone totally
Post a Comment
Read more